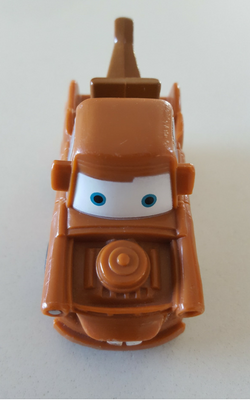 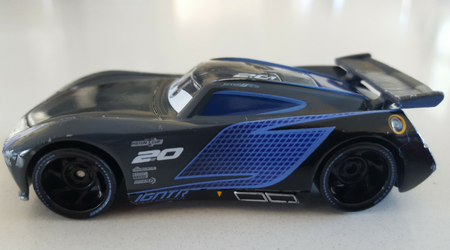 On Saturday morning we went off to watch the long-awaited, much-anticipated Cars 3  in 3D.

We’ve been watching the Trailers for Cars 3 all week.  This one was young Benjamin’s favourite trailer.

The only thing was, watching the Trailers had an interesting and unexpected effect on Benjamin.  In his mind, he was absolutely convinced that Jackson Storm was cooler and faster than our loveable hero, Lightning McQueen and was voting for Storm for the win.    Oops!    Was that your intention, Disney Pixar powers that be?

It was probably fortunate then that we didn’t make it through the whole movie because I’m sure we were in for tears at the end as I didn’t think it would be likely that Disney Pixar would allow this new rookie to win.  Maybe in Cars 4?

Twenty minutes into the movie, we were off to the closest supermarket to buy a Jackson Storm car.   I thought once we had the car Benjamin would settle into the movie but he only lasted another 5 or 10 minutes and then asked to go home to play with his cars.  We got to one of his favourite parts, where Cruz says, “The beach ate me”, and that was it. Our Cars 3 movie experience over. 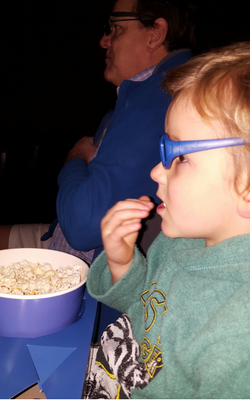 ay, granted, Benjamin is only just over 3 and a half and this was his first ever movie in a movie house, plus it was in 3D. Here he is in his 3D glasses with his box of popcorn watching the ads before the movie.

Luckily I caught this shot when I did because of course there was no chance of taking a picture at the end. 🙂

I think the major reason our son can’t sit through a full-length movie is that he can’t sit still for that length of time.  At home, when he watches TV he plays at the same time.

But I digress, let’s get back to the subject at hand – Disney Pixar Diecast Cars! 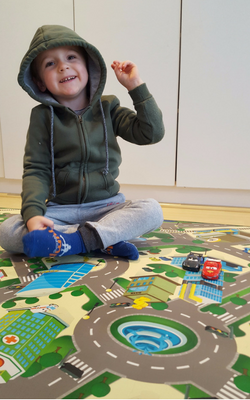 What my son loves about Disney Pixar Diecast Cars

Everything!  He plays with them in the living room, on the trampoline, in the shower or bath, he even brings them to bed with him. When we go to public play areas he always takes 2 or 3 with him so that he can play Cars with other boys. I love watching him offer the car to his new friends and explaining which is his favourite and why. It’s quite the currency for young boys (and some girls I’m sure) and a really good way of making new friends.  Fortunately, so far, every child he’s ever offered a car too has given it back to him when it’s time to go home.  That’s not to say we haven’t misplaced a good few cars or forgotten some behind, especially when Ben was younger.

To Ben, these cars a have-to-have. No question.

What I love about Disney Pixar Diecast Cars

They are virtually unbreakable, only the paint wears off over time and through lots of rough play.  My son throws his around, ramps them down the stairs, plays “bash cars” with them -which as the name suggests involves bashing them against each other – and they survive.  Oh, and of course they are also rust-proof.

Hours and hours of fun (away from the TV)

As a Mom, anything that keeps my child happy for hours on end makes me happy.  Especially when I have lots of housework to do. It’s a great alternative to TV and inspires imaginative play.

When I play with him, I find his play consists of a lot of role play of real life, rather than actually re-enacting movie scenes. He’ll use the playmat as his guide and go to the pet shop and get a black cat and then visit the ice cream shop or go for a burger. A shopping centre becomes The Paddocks to him, our local shopping centre.

It also makes for great bonding time with Dad. I love it when I hear my boys playing in the background while I’m cooking or packing the dishwasher or hanging up laundry. It makes me feel all warm and homely. Ben’s Dad gets into the spirit of boys play so much better than I do.  Hearing them laughing together over play time is one of my greatest joys in life.

There’s only one problem.  Benjamin wants the entire range.  Ka-ching!   Or should I say, Ka-chow? 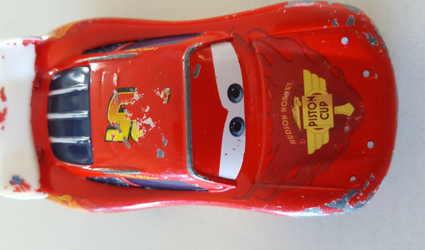 Luckily these are only $3.47 now on Amazon. Ours needs replacing!

Right now, the new cars based on the new characters in Cars 3 like Cruz Ramirez and Jackson Storm are pretty pricey at $12.95 and $13.95 respectively, but you can pick up a Lightning McQueen car on Amazon for as little as $3.47.

Find your child’s favourite Disney Pixar Diecast car on Amazon. With a bit of luck, they’ll still be into good ol’ Lightning … and make it through the whole movie and their box of popcorn. 😉

I’d love to hear your opinions…