A flood is probably not the most likely catastrophe to befall your workplace. You are far more likely to have to deal with malicious cyberattacks, troublesome employees, and vicious arguments about who cooked smelly fish in the microwave.

But it could still happen. A pipe could burst, your roof could be destroyed by a storm, or a local river could burst its banks and send knee-high floodwaters cascading into your office. In this scenario, your entire workplace will be devastated, and you’ll have to fork out thousands to replace expensive technological equipment and restore your business premises.

Operations will be disrupted, employees will have to work from home, and you’ll be dealing with the consequences for several months.

So even though it’s an unlikely eventuality, it’s a good idea to know what to do if this situation does happen to you. Here are four crucial steps to take if your office floods.

Contents hide
1. Be Safe
2. Stop the Flooding
3. Save What You Can
4. Call a Flood Restoration Company 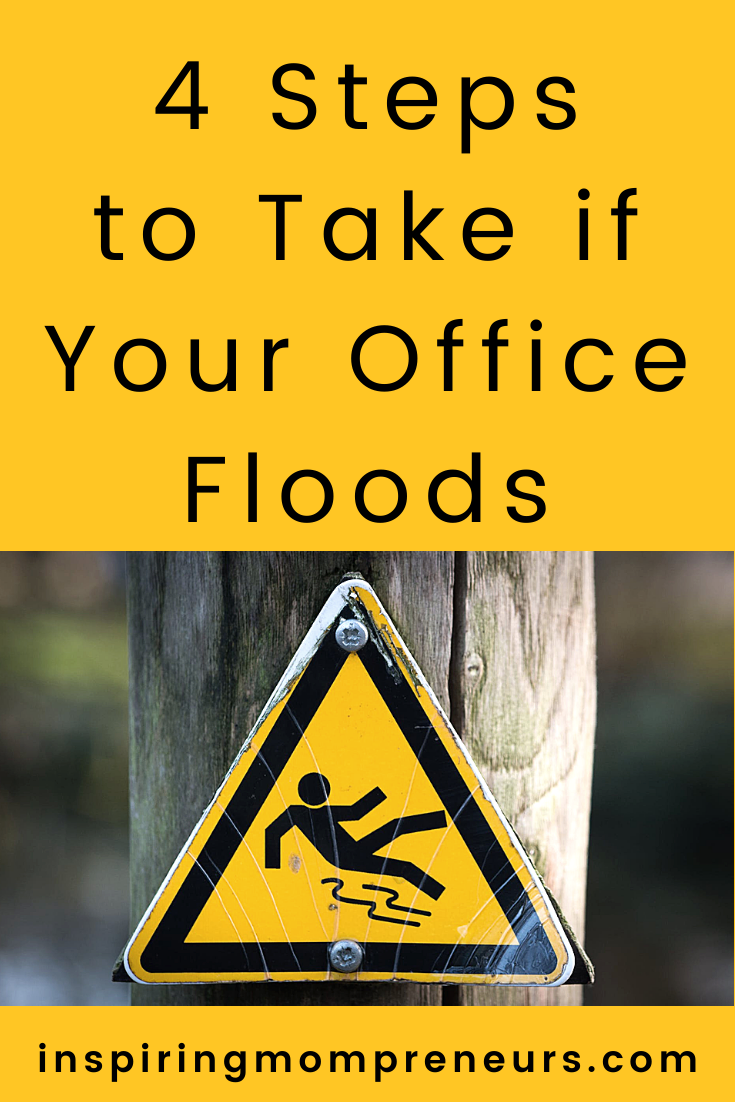 When flooding occurs, the first thing you need to do is ensure the safety of yourself and your employees. Don’t go rushing in to save your expensive equipment.

Electricity and water don’t mix, so you run the risk of seriously injuring yourself.  If you can get to the electrical controls safely, switch off the electricity to your entire office.

If you have to enter the building, make sure you tread carefully and be watchful, as vast quantities of water could have made walls and ceilings unstable.

You might be tempted to try and save computers and other equipment, but leave them alone. Even if the power is off, unplugging a wet computer from the socket could prove fatal.

Accept that the damage is done, and focus on getting everyone out of the office safe and sound.

This will usually be located somewhere on the outside of the building or in a separate structure, and you may need a key to unlock it.

You don’t want to be rushing around to find it, so it’s a good idea to familiarize yourself with these things now, so you will know what to do in an emergency.

3. Save What You Can

A flood restoration company, such as HL Restoration, is your best bet for mitigating the effects of the disaster. They will be able to arrive as soon as possible to remove the floodwater and prevent further damage to the building. Once the water is removed, they can get to work on restoring the destruction it caused.